With the release of The White Knight short film on Mr. Dick Trickle, I’ve thought a lot about those numbers in the last couple of days.

I had the privilege of spending some time with Mr. Trickle, #99 on several occasions and after a number of his wins. One of my favorites times with him was at a Slingers National. We were in a rain delay and Mr. Trickle ran up to the trailer I was in and for about an hour and a half I got to listen to him tell stories, most of which I’d heard before. But what made it special was that there was a young Collin Reffner asking questions and getting insight from Mr. Trickle. It was really cool. It’s pretty cool to listen to a man who won 2,000 races.

Then, a couple years later at Fest, Mr. Trickle and Mr. Reffner were together at a car giving advice to another young driver. Then, a couple hours later, the two greats were up by the turn three wall of the small track and I got to stand next to them just listening. Very cool!

Unfortunately we need to think about the third number. Listen to this quote: In 2013 (the most recent year for which full data are available), 41,149 suicides were reported, making suicide the 10th leading cause of death for Americans. Quote from American Foundation of Suicide Prevention. 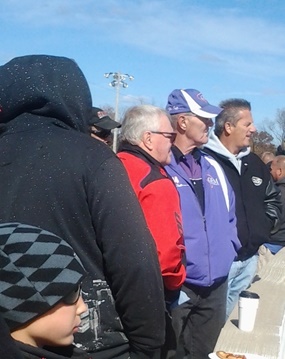 Those are staggering numbers. Suicide is real and effects every age, every race, every economic level and every social level. Those with jobs, great jobs, and no job. Those with doctorate degrees and those that have dropped out of school. As I write this I have tears coming to my eyes knowing how the evil one has suggested this option to so many and there are thousands who make that choice. In their hearts they see no other option as the pain or emptiness is too great to bear.

I have a little understanding of the pain Mr. Trickle was in and that hope had faded for finding what was causing it and how to stop it. I know some of the medicines were a problem. Now it is way past a few tears as my heart aches in pain thinking of so many. I think of the many soldiers that, after serving this country, feel hopeless. I think of the young one at a tender age, not even through high school. I think of a couple, full of life and then shortly after, lost hope. We have all had the evil one intrude those thoughts into our heart and minds. Again, I know they are real thoughts but I also know they are lies from the devil. The LORD gives hope and life, not death and sin.

PLEASE STOP AND THINK WITH ME
This is what God says in His word:
Psalm 38:17 For I am ready to fall, and my pain is ever before me.
Psalm 69:29 But I am afflicted and in pain; let your salvation, O God, set me on high!
Psalm 33:18 Behold, the eye of the LORD is on those who fear him, on those who hope in his steadfast love.
Psalm 42:5 Why are you cast down, O my soul, and why are you in turmoil within me? Hope in God; for I shall again praise him, my salvation.
Revelation 21:4 He will wipe away every tear from their eyes, and death shall be no more, neither shall there be mourning, nor crying, nor pain anymore, for the former things have passed away.
Deuteronomy 30:15 See, I (God) have set before you today life and good, death and evil.
1 Corinthians 15:57 But thanks be to God, who gives us the victory through our Lord Jesus Christ.
Romans 5:21 so that, as sin reigned in death, grace also might reign through righteousness leading to eternal life through.

This is a real battle. It is a battle of good vs. evil. It is a battle of life vs. death. It is a battle of the LORD God vs. the evil one. Maybe you know of someone in the midst of the battle or maybe you are that person. May I offer you three things? One, pay attention! There are little clues to those in the battle. Sometimes there are big clues. We need to pay attention to those God has placed around us. Two, there are many who care and I am one of them. PLEASE reach out to me or someone who cares. Three, there is only one place to win this battle. It is in Jesus Christ the LORD. In His salvation is hope and life found. He promises salvation to all who repent and call out on His name. There must be an admission of sin and not blaming anyone else. There has to be a change of direction. We must be willing to surrender to Jesus as LORD and place our faith and trust in Him. Does that mean all will immediately have those fears, the pain, and the troubles lifted? Maybe, but most likely not. However, there should be a new perspective on the fear, the pain, and the troubles. PLEASE turn to Jesus today, right now.

If we can help in anyway please reach out to us, to me, and have a great day racin’ in the SONshine,
Todd